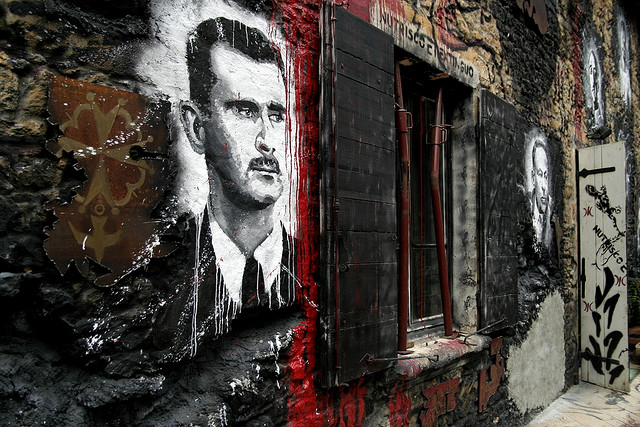 The military options for the West vis-a-vis Iraq and the IS are limited without some ability to operate permissively in Syria. This would require movement toward a political settlement to the Syrian civil war and an arrangement with Assad. We would need to work with those we find in power rather than those we would wish to find there.

Politics in the Mideast is not for those with weak stomachs. Ruling there within the artificial borders left behind by the colonial powers is no easy task. The many internal and cross-border

fissures – ideological, sectarian, ethnic, tribal, clan and extremist – with which governments must contend make the job hard enough. Add the apparently existential conflict between Israel and the Arabs – also set in motion by the Europeans when they put the burden of the Nazis on the backs of the Palestinians – adds another level of difficulty. The region has no history or experience of democracy. The so-called “Arab spring” expressed the deep frustration of populations abused by corrupt regimes. But success in overturning governments exposed the fissures “to the air” and made it near impossible to maintain stability through anything genuinely democratic.

Indeed, the region’s regimes have been generally authoritarian and the rulers not shy about the use of force to hold things together. Jordan has been an exception, blessed by intelligent and pragmatic kings using diplomacy (triangulating between Israel, the Palestinians and their less agreeable Arab neighbors), a degree of internal openness and Arab money (when they can get it) to maintain internal peace. The Gulf states – most characteristically Saudi Arabia – have utilized huge piles of money and fundamentalist Islam to keep divisions at bay. Saddam and the Assads used, sometimes brutally, repression and force – with doses of Arab nationalism and socialism – to hold Iraq and Syria together. Egypt – the brief Morsi period aside – has been ruled by military “pharaohs” for decades. Lebanon barely holds together at all under its multi-confessional arrangements. In none of these countries has anything like Western-democracy played any real role.

In Iraq, Saddam knew how to deal with any sign of opposition.  His regime would likely have continued along but for the historical calamity of the Bush/Cheney/Rumsfeld/Tenet-led US invasion. In Syria, Bashar Assad was perhaps not as practiced as his father, Hafez. When faced with the 2011 protests against his government, he first suggested openness to limited change and even the possibility of elections. His father would never have shown such “weakness.”   The opposition – encouraged by who or what? – refused and Assad responded with force. Outsiders drawing “red lines” and offering encouragement (if not arms) to “moderate” rebels contributed to the resultant escalation of violence as much as Assad himself. And Assad learned. He blew through the mostly rhetorical demands that he end the attacks on his own people and has proceeded to gain the upper hand in the struggle. But against the background of international involvement – invasions in one and support for hapless rebels in the other – both Iraq and Syria have descended into an anarchy providing fertile ground for a new, even more dangerous form of terrorism. Bashar Assad told us this would happen, warning about who might step into any vacuum left behind if his government fell. But he himself could not resist playing with fire. His strategy included allowing ISIS – now the Islamic State (IS) – to war against his other opposition. (Turkey too has allowed ISIS space but to take the war to Assad. In the Mideast, politics makes for very strange bedfellows.)

The “caliphate” itself accepts no state boundary and has carried its efforts not only to Iraq and Syria but to Lebanon as well. The US and Europeans have now woken up to the IS threat. American aircraft are being used in support – implicit when not explicit – of Kurds, Shia, Bagdad and Iran against IS in Iraq. The US Chairman of the Joint Chiefs of Staff has made clear, however, that the fight against IS must be joined in Syria as well. Washington and London must be considering their options because they have felt the need to say they will not, nevertheless, deal with Assad. On one level, this is understandable. The UN reports that the death toll in Syria had now surpassed 190,000 with hundreds of thousands more living as refugees in over-stretched neighbors. How could we work with the regime that we hold responsible for most of this?

Yet, there is reason to consider finding a way to find an arrangement with Assad. The military options for the West vis-a-vis Iraq are limited without some ability to operate permissively in the air and on the ground there. This would require movement toward a political settlement to the Syrian civil war. By now it must be accepted that expecting Assad to give up power as part of a settlement is unrealistic. Some sort of compromise would be required. Any compromise must be based on an objective appraisal. So, it may be necessary to recognize that Assad has basically now “won” his battle to remain in power. Until now, and with no other options, he may have found IS attacks on the other rebels convenient. But finding a way to reestablish some sort of relationship with the US might still be attractive enough for Assad to win some degree of political moderation and cooperation. (He did give up his chemical weapons in an earlier effort.)

The West has made colossal mistakes with Iraq and Syria. The US helped create the conditions which weakened the states the British and French left behind. Working together, with Russia and Iran, and accepting the regimes we must accept to provide some coherence on the ground – easier perhaps in Iraq now that key actors accept Maliki was a mistake – may bring together the degree of force and stability necessary to contain and defeat IS. Working with governments in Iraq and Syria to provide services and stability to their people – plus some degree of decentralization – in the wake of driving out the terrorists will be necessary to win anything like a permanent peace. We would need to work with those we find in power rather than those we would wish to find there.