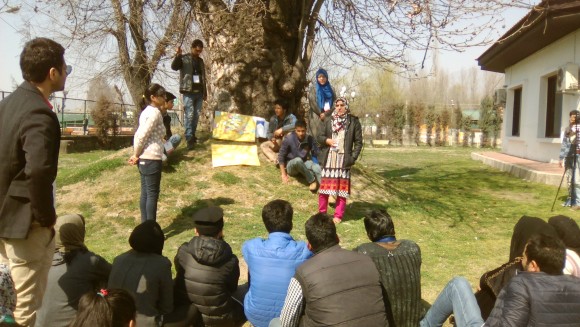 Youth extremism in Kashmir is becoming a worrying problem, but a recent workshop organised by the Yakjah Reconciliation and Development Network aims to dismantle stereotypes and build trust between young people.

Youth radicalisation in Kashmir is becoming a worrying problem. Young people are increasingly finding themselves in a prohibitive environment with the rise of militant-security groups becoming an enticing option for many.

2016 started with a shutdown for more than a week in January in Pulwama, South Kashmir. Locals were insisting on instilling a memorial to local and foreign militants killed in gunfights with security forces. After days of violent protests against the militant killings, police arrested 10 youths accused of being behind stone-throwing incidents. This sparked more protests and stone pelting. In one such incident, two locals – 17 year old Danish studying electrical engineering and 22 year old Shaista pursuing a Master’s Degree in Urdu – were killed by security force bullets.

In the last week of February, two Captains of the Indian Army lost their lives in a gun battle in an encounter with militant-security forces half an hour’s drive from Pulwama. One of them was from Udhampur, a district town in the state, highlighting the polarised narratives across the Kashmir and Jammu regions. Negotiating this violence to broker peace, local peacebuilding organisation Yakjah Reconciliation and Development Network braved tensions to reach out to youth in Pulwama.

Reaching out to youth across divides

Training skills in listening, dialogue, empathy, mindfulness and consensus building enabled the young participants to step out of their comfort zone, overcomepersonal doubts and interactwith 100 college students – helping to recover trust and good will between them.

Originally, the 25 young leadership facilitators were scared of going to the ‘hotbed of tension’ of Pulwama, South Kashmir. “The name stirred fear as it had become a hub of militant-military encounters and stone pelting”, says Danyal Pathan, from Poonch in Jammu.

Marzia Bano from Kargil shared similar doubts, “Fear grips ones heart. My mind was chaotic because of negative thoughts. I was so scared of going to Pulwama. The stories we had heard of the Pulwama youth as extremist, radicalised and violent were frightening”.

“We were also not sure how the students would perceive us. Would they trust us?” adds Pathan. However, the human connection dispelled all myths as magic unfolded in Government Degree College, Pulwama.

“It was mindboggling”, says Jibran Nazir of Sopore in North Kashmir. “The only way to change the world is to change the story and we were definitely changing the script in Pulwama”, says Taman Rajput Slathia. “Our stereotypes crumbled and we saw another face of Pulwama, a face not written or talked about after we interacted with the students there”, shares Bano.

The five day workshop concluded with the idea of disseminating similar skills to local communities.

“I learnt how to come out of the box and think in such a way that it does not trigger a response within me that affects my emotions in any way”, said Affarmand a workshop participant from IGSSS.“Bringing this learning to students in Pulwama was a co-learning experience for me”, she adds. Determined to translate her learning on the ground, Addarmand has developed a leadership module to take elsewhere in Kashmir.

Mahima, a young girl student in the college came up on the stage and spoke out confidently, “This is the first time in my life we had an experience like this one. Discussion on gender made me realise that it is we who create the society, hence it is up to us as to create the kind of society we wish to live in”, she said.

The emergence of militant youth groups

The emergence of Burhan Wani, a new militant youth icon, reflects the way a new youth constituency is emerging. They take pride in challenging the state ‘for the cause of Islam and establishing its rule in the region’.

A resident of Pulwama, Para, elaborating on the situation on the ground, added: “They do not care for democracy and its values and use religion to gather support for their idea of system”, a notion that is immediately dispelled when dialogical and inclusive spaces are created through trust. It is critical, however, to understanding the growing disenchantment among youth.

Growing up in the shadow of violence, religious orthodoxy, extremism and a corrupt political system that fails to fill the vacuum, many young people feel like they have arrived at a dead end. To pick up a gun, change the system though violent means and establish a new rule of law is slowly starting to become a core belief.

It is a belief that is perpetuated and strengthened through local religious congregations, contact with religious clergy, sermons, reading of religious and provocative literature and separatist discourse that deliberately fills the heart of Kashmir youth with hate for India.

This constituency of ‘rebels’ also finds support from a society which has over the last two decades internalised the idea of Kashmir as a ‘Muslim land’. Unfortunately an ideology of hate indoctrinated by radical mosques and madrassas has crept out to enter drawing rooms and kitchens, inflicting hearts and minds.

“Youth are not finding space within the system”, says Waheed –ur-Rehman Para, President of the People Democratic Party Youth, “and this is what we have to change”.

However, a sense of discrimination, alienation and growing religious fanaticism would not have found ground or strength if there had been no direct political or personal experiences of being abused by the security forces, resulting in a deep sense of indignity and humiliation.

“When a direct or perceived grievance with oneself or with a family member is not redressed, it finds an outlet through violence”, remarks Pathan. It is crucial to address these gaps, something local peacebuilding organisation Yakjah has been engaging with.

True, youth in Kashmir are growing in a repressive environment but there is a need to move from beyhissi (non engagement) to hum dili (empathy). Listen to the youth; they have a story to tell, one that must be heard.