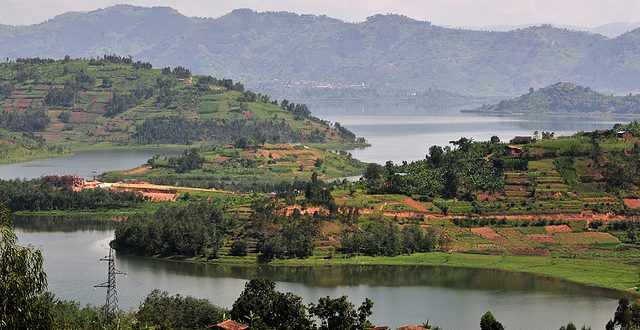 A better understanding of today’s political phenomena as part of a longer historical process, knowledge from precolonial societies about change processes and a more holistic and locally adapted support to mediation and good governance in the Great Lakes Region could be some of the benefits from reading this exciting book.

Exactly twenty years ago David Lee Schoenbrun published “A Green Place, A Good Place”. The 300-pages study describes the interrelatedness between climate change, governance, gender and spiritual healing in the Great Lakes Region between 500 and 1500. Despite the obvious similarity of issues that have defined conflict in the region’s past and present, one might rightfully ask why should today’s peacebuilders – researchers and practioners – deal with historical research?

Firstly, it seems that research is still predominantly sectoral – while historians may know the book, peace researchers and practicioners rarely discuss precolonial solutions to challenges that have existed since long ago. Separate fields of knowledge in contemporary western sciences could benefit from being linked with each other.

Secondly, as we try to put into practice the vision of ‘sustainability’ in peace and development interventions, one approach might be to go deeper into the past hoping that solutions that build on diverse types of knowledge of various ages might prove more enduring.

Finally, future studies on Africa show that the Great Lakes Region will be one of the areas most inclined to stay entrapped in violent conflict due to climate change and its high population density. Therefore, it might be interesting to look at how the region has dealt with similar challenges in the past when there were no external influences, which values and tendencies for action this reflects.

The specific contribution of the present study, which is still a central source of reference to numerous historians, is that it differentiates concepts of power and societal relationships focusing on dialectic forces. Schoenbrun describes power in medieval times as having been decentralised, dispersed, parallel streams that mutually influence each other. He points to sources of power where we do not expect them.

Schoenbrun bases his work on interdisciplinary methods but he also contributes to their further development – besides techniques from archeology, environmental sciences and comparative ethnographic research especially those from historical linguistics deliver new insights. Analysing how words developed over time might be a method worthwhile examining for today’s mediation efforts as mediation also promotes dialogue about the meaning of words and leads to consensus about definitions.

According to the study, except for the Batwa, who had in fact been living in the region before everyone else – members of sudanic, sahelic, cushitic and Bantu-language groups had all already immigrated 2500 years ago. In this first period of development, they shared their agricultural specialisations with the members of the respective other groups leading to a mixed exconomy and relatively open societies. Until 900 it was easy to explore new territories and to achieve the desirable status of ‘firstcomer’ (basangwa). Families who owned that status often became local chiefs and could integrate newcomers into their community or reject them. They could also build clientelist networks that worked in their own favour. Newcomers who possessed attractive resources and who were skillful negotiators could reposition themselves in the social hierarchiy. As Schoenbrun demonstrates by analysing words that had been invented between 500 and 1000, many relationships of equal rank were created to avert loss of land and goods in cases of childlessness.

Closing the space – hierarchisation around 1000

Progressive specialisation as f.i. the improvement of banana farming and cattle herding in the 11th century combined with a significant growth in population and unsteady rain fall led to conflicts about land use. This in turn gradually produced conditions of greater social inequality. The new relations that were built to secure the continuation of lines of succession were more hierarchical, f.i. clientelistic systems greatly expanded, and many political offices (besides the mwaámi also the offices of mutwále, mutáambo and mukungu, and later on muluzi and muhinza) were created. At the same time, the relevance of family ties declined. Local leaders created a number of outsider roles to ensure that access to resources was solely granted to them and their followers. From the beginning of the 11th century, a period of power concentration began that led to the emergence of centralised states from 1500 onwards.

A key theme in the book is the contrasting of ‘creative’ and ‘instrumental’ powers. Beginning in 500, some social groups became political leaders’ clientele, others resisted against them. From about 1100 onwards, they began to compete against each other more vigorously. Members of each group (f.i. women, newcomers, cattle farmers, local officials or miners) used their contributions to livelihoods – skills and relationships – to strengthen their influence in their family, clan or community.

The elaborate and skillful use of words, pauses and gestures characterised healers’ creative power (bafÚmÚ). They mediated conflicts, held speeches, made contact with the ancestors and conjured away illnesses. Political leaders acquired instrumental power by expanding their clientelistic networks through gift making (kugabíra) or military pressure and by organising economic conditions thereby also resolving conflicts. Schoenbrun’s analysis concerning the competition between the two forms of power concludes that leaders at all times have been striving to unite both, but that they could not manage to do so for long.

Settlements between the Central African Rift Valley and Lake Victoria became increasingly densely populated until the 10th century. Only the wild savannah was left largely untouched by humans until cattle farmers discovered its advantages for breeding larger herds. To distribute the risk of loss through illness or theft, animals were usually given to a friend to take care of them while being able to use the milk or produce a cattle herd. This tradition was expanded so that large amounts of cattle were systematically distributed across the land (kusenga practice). When a farmer received a new cow it was a visible sign of a lower social status. The status could only be improved if the farmer gave a cow to yet another person. Hierarchically structured clientelistic networks grew as they had never before. The new possibilites to create geographically widely distributed relationships of dependency and to achieve wealth meant that women’s contribution was reduced to producing offspring. Patriarchal norms such as hierarchy and sexual control of women begun to superpose formerly open and more egalitarian systems. First, women were no longer allowed to inherit cattle. Later, the value of a woman decreased to that of a cow – to build alliances, one used to marry strategically, now one could simply trade cows. In Schoenbrun’s interpretation, this led to closed clientelistic systems and finally to a spiritual resistance movement (cwezi kubándwa), which appeared in large parts of the region around 1400, critiqued violent leaders, rebalanced gender relations and helped societal outsiders to improve their social status.

Healer were able to do something that leaders could not – avert or conjure infertility through connecting with spirits. Due to unsteady rain fall around 1400 fear of childlessness (bucweke) increased. Clientelistic systems depend on heirs in order to stay stable in the long run.

During this time, healers granted access to creative power to socially disadvantaged people by inventing a spirit that used most diverse types of people as medium and by initiating many into becoming a medium. When mediums would, in a state of obsession, criticise their leader and social injustice, they could not easily be punished, as they only represented the voice of spirits. With the ‘revolution of the obsessed’ power gradually shifted back from the top to the local level. Many people had more trust in their local healer than in their kings and their officials which caused the politicians to integrate healers into decision making processes.

The author does unfortunately not place his findings within an overview of research even though he cross-references a lot. His interpretation of history is only one of several possibilities – others claim that healers adapted to the hierarchical system and even legitimated it.

The book’s relevance for today’s peacebuilding and development efforts

Many rituals and conflicts indeed did continue until the 20th century, and some key themes have existed since long ago and continue into the present, something that Schoenbrun hints at with several examples throughout the book. As John Lonsdale put it, the value of analyses such as the present one was evidence about precolonial social systems’ practices of changemaking. Change occurs if one social group gains access to more valuable resources and begins to control others or when a group undermines this dominance by recruiting new members and teaching them their specific techniques of livelihood. Power is connected to livelihoods and is constantly being rebalanced.

As the study’s results allow for new assumptions regarding current transformation processes, it could be an inspiring read for peace researchers and experts in development cooperation. They can benefit from looking back to the precolonial past in order to better understand today’s patterns of political phenomena as part of a longer process. Knowledge about precolonial societies could guide current intervention strategies, so that mediation and good governance in the Great Lakes Region could be supported in a more holistic and locally adapted way.

Karoline Caesar currently works as freelance consultant, she has been working on peace and civic participation in Eastern Africa since 2008.

David Lee Schoenbrun is a historian at the University of Georgia, USA. He has been researching and teaching African History for more than forty years.